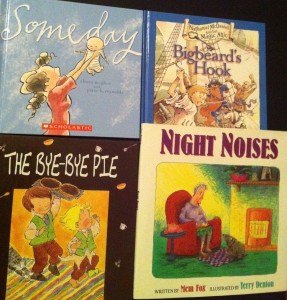 Canadians love to read. As I head out to the bookstore to pick up some Christmas gifts, I am reminded of this. We are a country of readers and should all be born with a library card in our pocket.

As parents, we instil a love of reading in our kids and teach them to read at an early age. As grandparents, we really enjoy reading to our grandchildren. Reading brings immense joy. What could be more delightful than to sit with a child on your lap, cuddling as you read an adventure or look at a picture book together? Moreover, this is a wonderful way to stimulate a young mind because sitting together and reading is foundational for child development during the early years.

I have been on the lookout for children’s stories that portray wonderful family relationships that are intergenerational, especially books that have images of vivid, engaging grandparents. I have collected some real treasures. Here are a few of the favourites from my shelf:

I expect to see more books that provide positive images of seniors on library and bookstore shelves. As the population ages, books like the ones above will be written and published to meet the demand for good intergenerational stories. If you have some books to add to this list, I’d enjoy hearing about them.

Have a wonderful holiday. Happy reading to all!

P.S. Dear Readers - To the above list, I am adding:

When we look around, we are surrounded by elders – those actually in our lives who are close to us and those who we encounter.

Growing up, I was often among seniors and elders so that I felt comfortable with them, just sharing and chatting, listening to stories and getting their advice and input. I am so blessed to have them in my life.

This week I have been deeply moved by two elders. I am going to call them both elders because they are in their late 70’s and early 80’s. In addition, they are at a time in life when they influence others by bestowing wisdom, mentoring younger generations and leaving a legacy. They are of an age that deserves the respect of a word like ‘elder’. It conveys a different image than that portrayed by ‘senior’.

The first elder is a family friend who I re-connected with after not having seen him for many years. Recently, I have been visiting with him – having coffee or dinner and chatting on the phone. He is very caring toward everyone and he loves to help others. His name is Bob and I was thrilled when his new book came out. It was wonderful to attend his book launch with my young daughter. Unfortunately, during the last few weeks he has not been well and it is very difficult to see him suffering from ill health. His days consists of a lot of rest with his wife driving him to medical appointments. Through it all, every time I call, he is his bubbly self – this despite the pain, the frustration and the uncertainty. He is always gracious, caring and engaged. It is a wonder to observe how ill health hasn’t curtailed his zest for life, his vitality and his interest in everybody. He is truly amazing. This is part of what it means to be an elder who is aging successfully and gracefully.

The second elder is Leonard Cohen whose show I just saw in Toronto. He joked about aging throughout his performance. On his new album, many of his songs contain lyrics that convey images of aging “…my friends are gone and my hair is grey. I ache in the places where I used to play…” He talks about missing cigarettes, wondering if he’ll reach age 80. He muses that perhaps he will not make it back to Toronto in 2 years to do another show – all this while doing jigs across the stage during a more than three hour show. He seemed on a mission to continue to be vital and vibrant. He amazed us all; however, I was disappointed that he didn’t tell the audience that he gave up smoking for his health – he obviously still craves cigarettes and he isn’t the only one to struggle with this addiction. In using humour and beautiful lyrics to discuss growing older, he connects well with his audience – we are all aging too (even those of us who don’t have the grey hair). All of this tells me that he is an elder as well – someone who is so caring and gracious, he knows all the support staff by name as he thanks them for their assistance; someone who can influence other people with the words he choses; someone granting wisdom and leaving a legacy.

The role of elder is not to be feared or dreaded. If we are blessed with a long, rich life, we will enter this stage too. As we age, we lose those who are dear to us in the generation immediately above us, so that we are the ones who are left to fill the role of elder. Eventually, we will look up and realize that we have become the elder who is asked about having all the answers, the one who is responsible for mentoring, guiding, informing, advising and inspiring the next generation.

What kind of elder are you becoming? I’d enjoy hearing your thoughts and comments.